Jacob Peter Kovner has a trust fund. Unlike a conventional inheritance, the money in a trust fund does not incur estate tax or gift tax, thereby maximizing the transfer of assets among generations within a wealthy family. In this way, trust funds are a contributing factor to the growing gap between the rich and everybody else.

The documents which make up Kovner’s trust consist of pages and pages of legalese. They stipulate the conditions under which Kovner can gain access to this fund which bears his name – as such, they try to inscribe a life story onto him. In his work, Kovner responds to this pressure by writing a different version of his life while problematizing how rich subjects get formed.

In the performance that this film documents, Kovner tells the story of his trust fund, while his double, sitting opposite him, tells an alternate version – that of an artist inventing himself through his work. The two performers then ask the audience to participate: what do they think is at stake here? The audience, perhaps expecting a head-on critique of the rich, is instead offered a strange foregrounding of this individual’s pain and pathos.

<Doubles> questions auto-fiction and its political use — or lack thereof. Does the political lie in the personal, or is critique impossible when the terrain is so subjective? Like many of Kovner’s performances, the piece is a staged conversation, asking audience as well as performers to engage all together in an agonistic exchange; this work tracks whether or not the group is able to make use of the desires and needs in the room to propel the conversation forward. What problems emerge when one, very privileged subject is placed at the center? 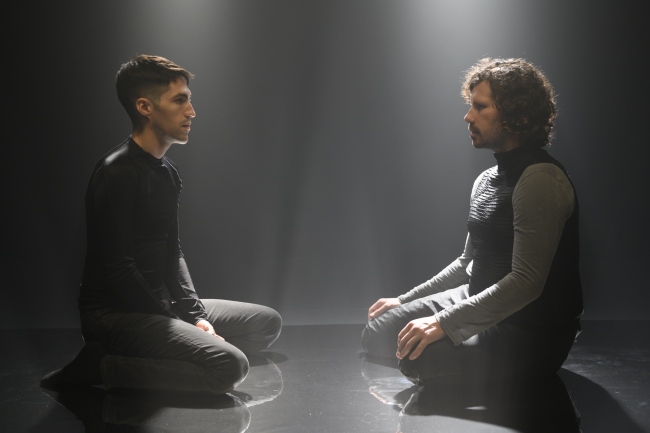